Are the financial or economic costs or benefits of actions modeled in En-ROADS? Print

The economic costs and economic benefits of policy actions are not included in En-ROADS, and moving the sliders does not affect economic growth in the model. Economic effects of these actions are difficult to quantify and we have not included them in En-ROADS at this time. The economic cost of climate change can be modeled using the “Economic impacts of climate change” damage function in the Assumptions pane.

The economic costs or benefits of actions in a scenario are not included in En-ROADS and in general do not affect economic growth.

While limited, economic growth can be impacted in these ways:

There is too much uncertainty and fluctuation around the costs of the different approaches covered by En-ROADS, especially if considered at a global scale over the coming decades, that it would be difficult to accurately represent the sum of those costs in the model. So as you create a scenario with many sliders, you will notice GDP will not change. This doesn't mean that GDP is not affected in reality; it just means we haven't modeled it. There is uncertainty about whether climate mitigation actions would have either a positive or a negative effect on GDP.

Revenue and costs of taxes and subsidies (including carbon price) 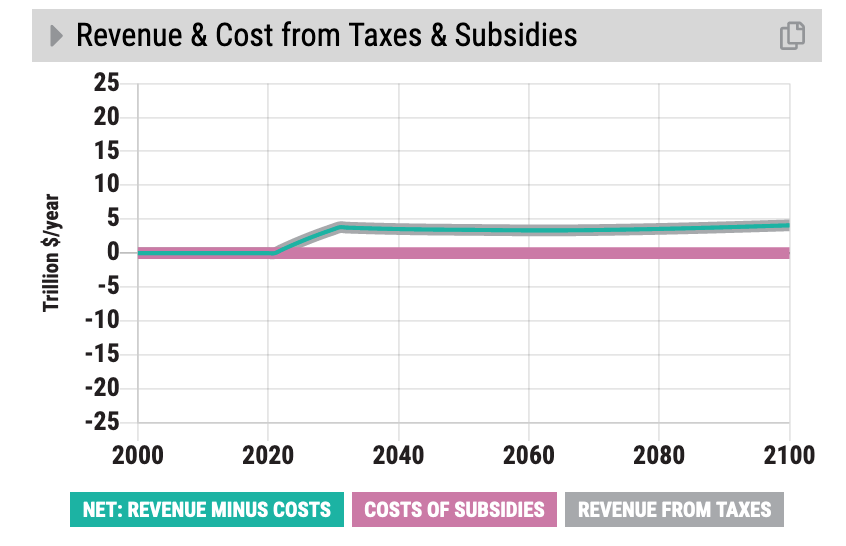 Climate change is already having, and will continue to have, a negative impact on the economy. This can be modeled with a climate “damage function.” This can be explored in En-ROADS in the Assumptions pane under Simulation > Assumptions > Economic impacts of climate change.

For more information on the climate damage function in En-ROADS, you can read these FAQs and this blog post: