Why are the slider ranges (min and max) what they are? How did you decide the range of the sliders? Print

- The ranges of the En-ROADS sliders are not equivalent between sliders.

- We selected the ranges of the sliders to reflect a distribution of possible policy proposals, but it is somewhat subjective.

- The difficulty of taking these actions in the real world is not equivalent between sliders.

How do I learn more about the slider settings?

The En-ROADS User Guide contains information about the ranges of each En-ROADS slider in the “Slider Settings” sections for each slider. The full User Guide can be accessed here: https://docs.climateinteractive.org/projects/en-roads/en/latest/ or you can access the User Guide section for each slider in the advanced settings of that slider by clicking the three dots next to the slider’s name and then the “i” button on the top right of the advanced settings panel: 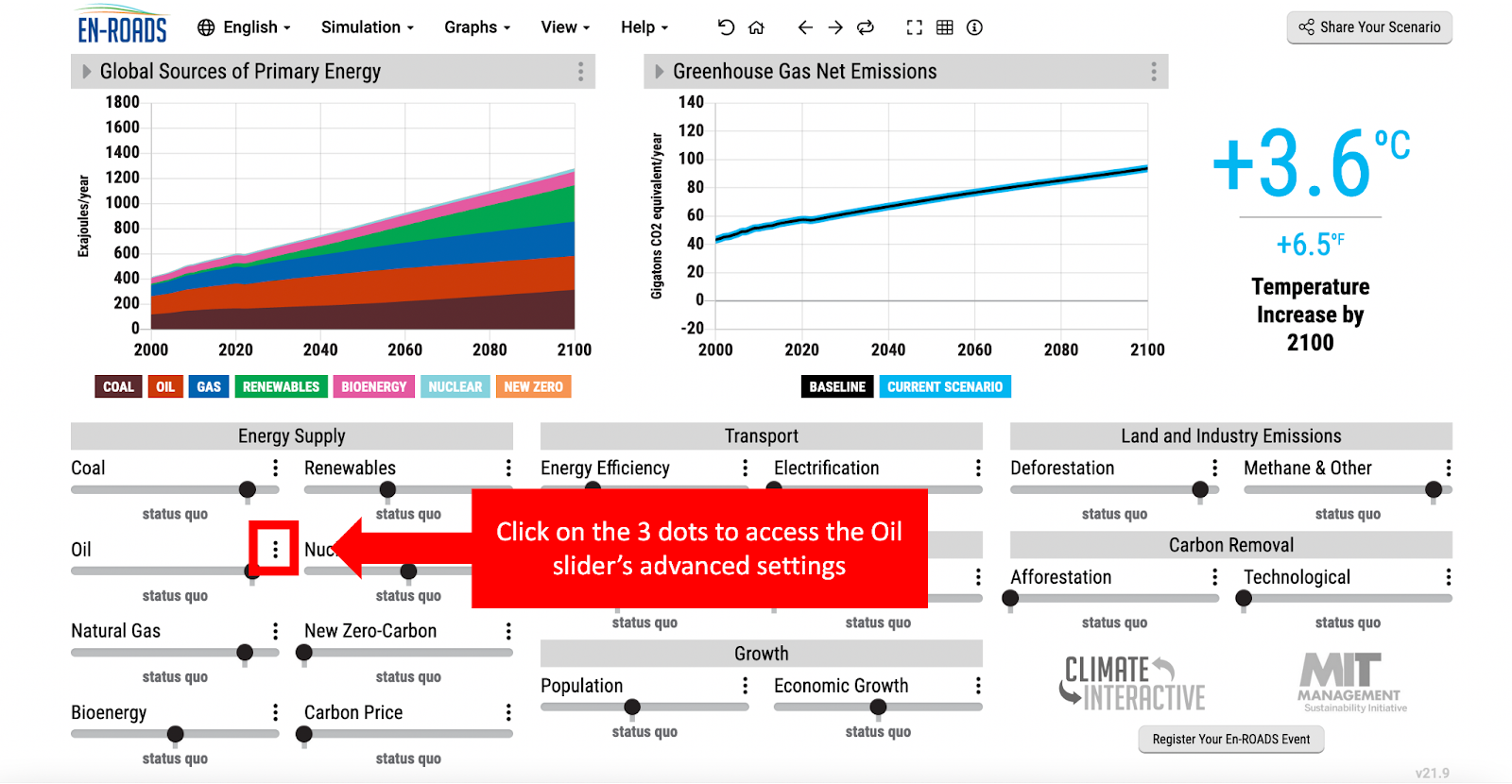 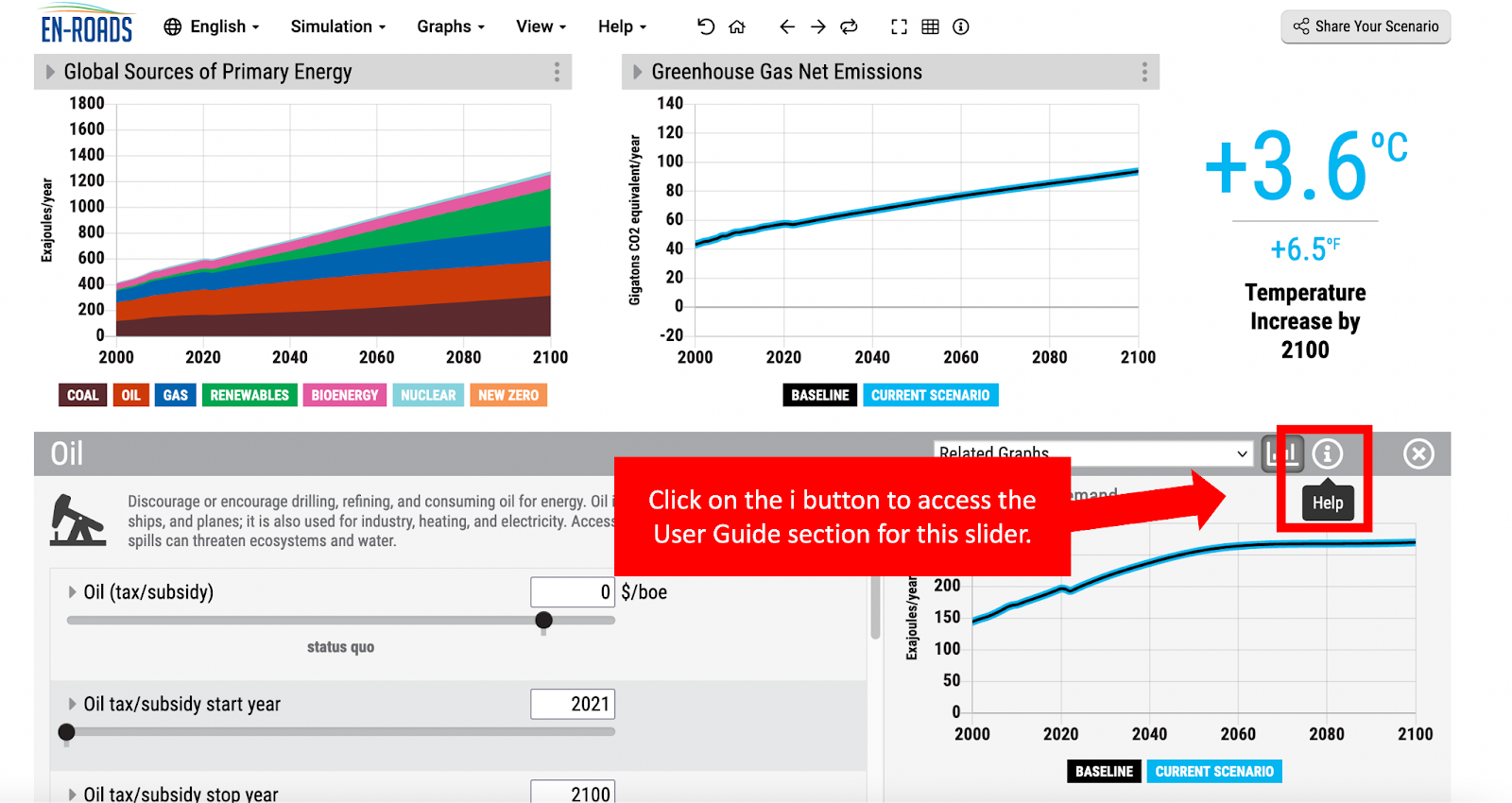 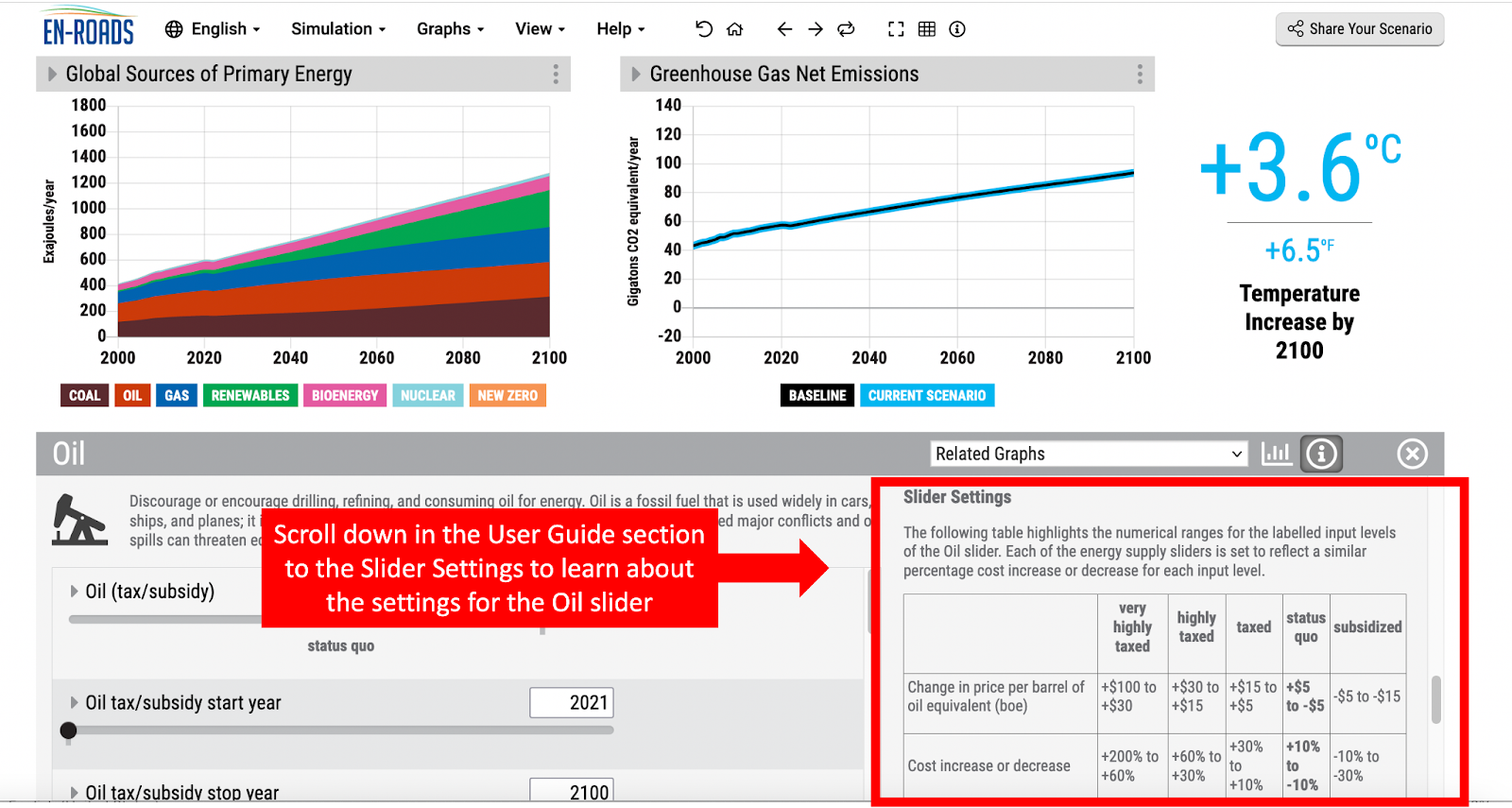 The ranges of energy supply sliders (Coal, Oil, Natural Gas, Bioenergy, Renewables, and Nuclear) are equivalent in their percentage change in cost

On the left side of the En-ROADS control panel you can find the energy supply sliders: coal, oil, natural gas, bioenergy, renewables, nuclear, and new zero-carbon energy.

New zero-carbon energy is explained below. For the other energy supply sliders, each slider is divided up into input levels, e.g. “status quo,” “subsidized,” “taxed,” and “highly taxed.” The sliders are set to reflect a similar percentage cost increase or decrease for each input level. For example, the “highly taxed” input level is adds a 60% to 30% tax for all of these sliders, which translates to +$2.00 to + $1.00 (U.S. dollars) added to every thousand cubic feet of natural gas, +$30 to +$15 added to every barrel of oil, and +$40 to +$20 added to every ton of coal. So if you want to highly tax both coal and oil, you can move those sliders to “highly taxed” without needing to know the exact numbers — the model takes care of this for you!

The New Zero-Carbon Energy slider has a unique range 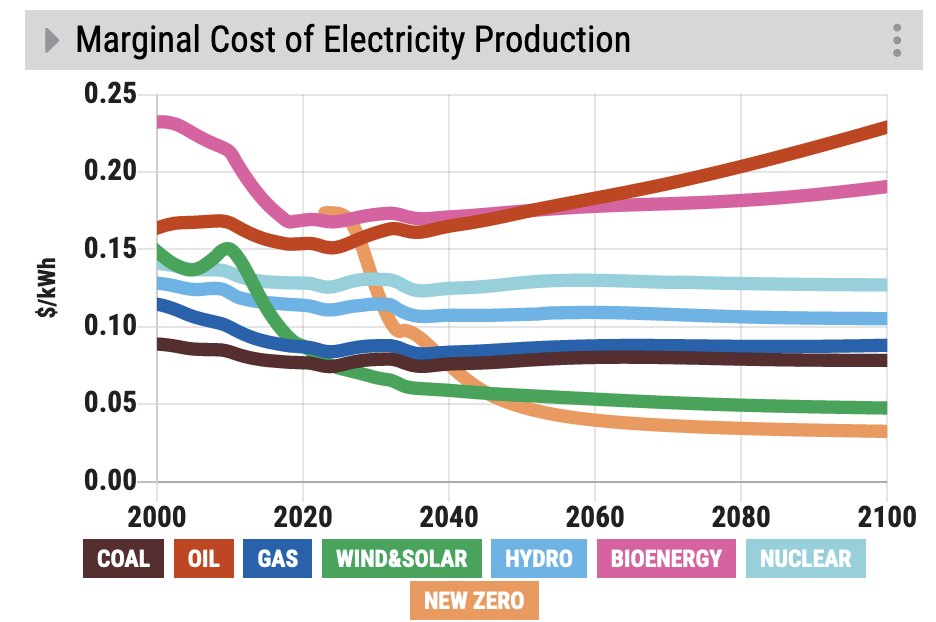 The ranges of other sliders are not equivalent to each other

The other sliders in En-ROADS have unique ranges, and the ranges are not equivalent between sliders. For example, the maximum range of the Carbon Price slider is $250/ton, which is equivalent to $660/tce tax on coal. The maximum range of the Coal tax slider is $110/tce. So the Carbon Price slider has a greater range of impact on the cost of coal  than the coal tax/subsidy slider.

The difficulty of taking these actions is not necessarily equivalent

Similarly, the difficulties of implementing the policies of each slider are not equivalent. That is, implementing the maximum (or minimum) values of each slider does not present an equivalent degree of difficulty to enact in the world. For example, moving the Transport Electrification slider to its maximum (5% per year) is not necessarily as difficult as reducing deforestation by 10% a year (moving the Deforestation slider to “highly reduced”).

Sliders affect other parts of the system

Think of the sliders at the bottom of En-ROADS as a control panel, and the graphs up top as a display of what’s going on in the system. When you move a slider, it will have ripple effects across the whole system, including affecting the result of other sliders that you can move.

For example, if you subsidize renewables, you’ll notice in the graphs that the proportion of transport and buildings and industry that is electrified increases, even though the electrification sliders were not moved. See this scenario here: https://en-roads.climateinteractive.org/scenario.html?v=21.11.0&p16=-0.03&g0=46&g1=45 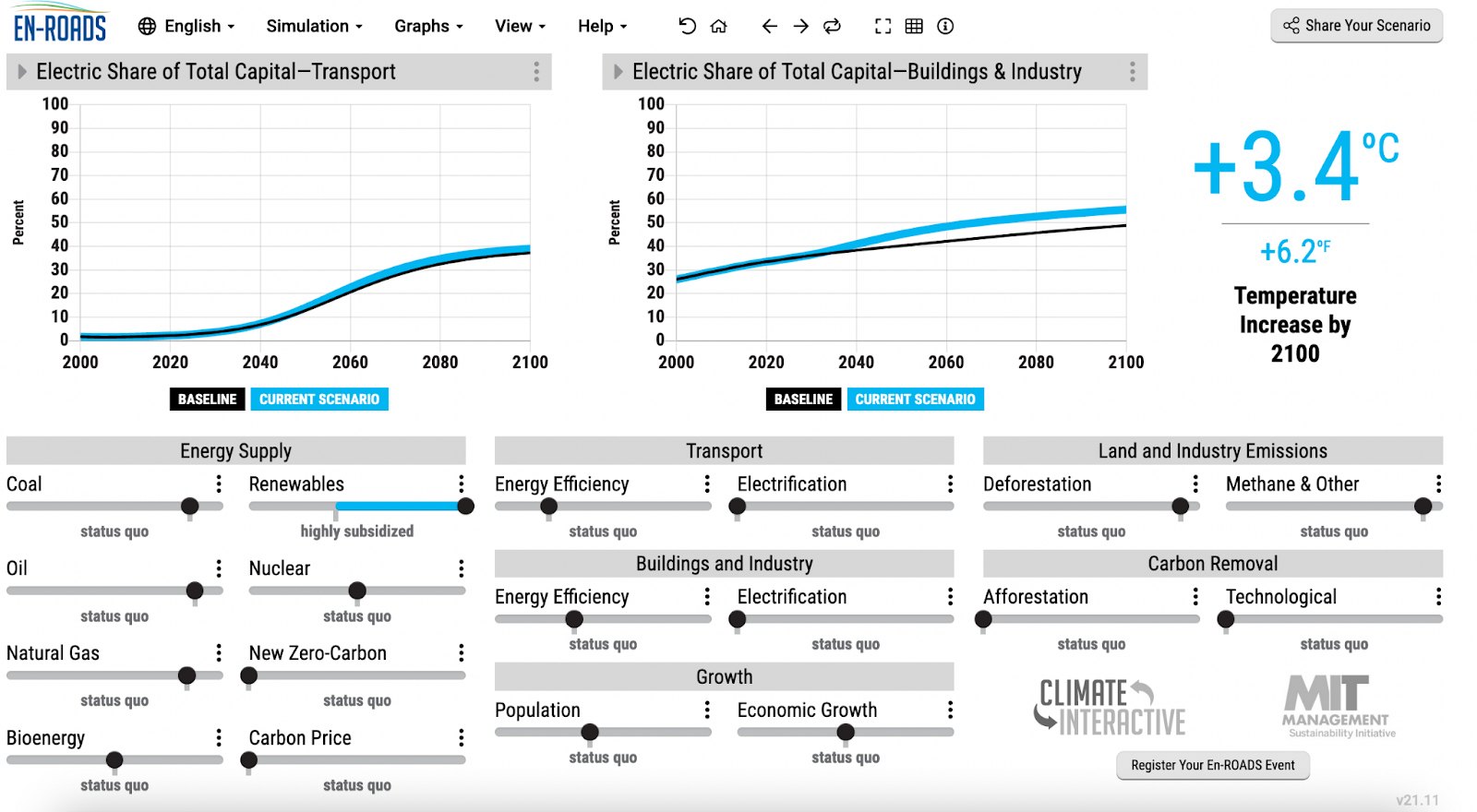 En-ROADS is a dynamic model of a whole system: an action in one sector (subsidizing renewables) will cause changes in another sector (electrification of transport and buildings and industry). Just like in the real world, making renewable energy cheaper will incentivize companies to build more electric vehicles, charging stations, heat pumps, etc.

If you also move the Transport Electrification slider in this scenario, this will cause additional electrification: (https://en-roads.climateinteractive.org/scenario.html?v=21.11.0&p16=-0.03&p53=53&g0=46&g1=45): 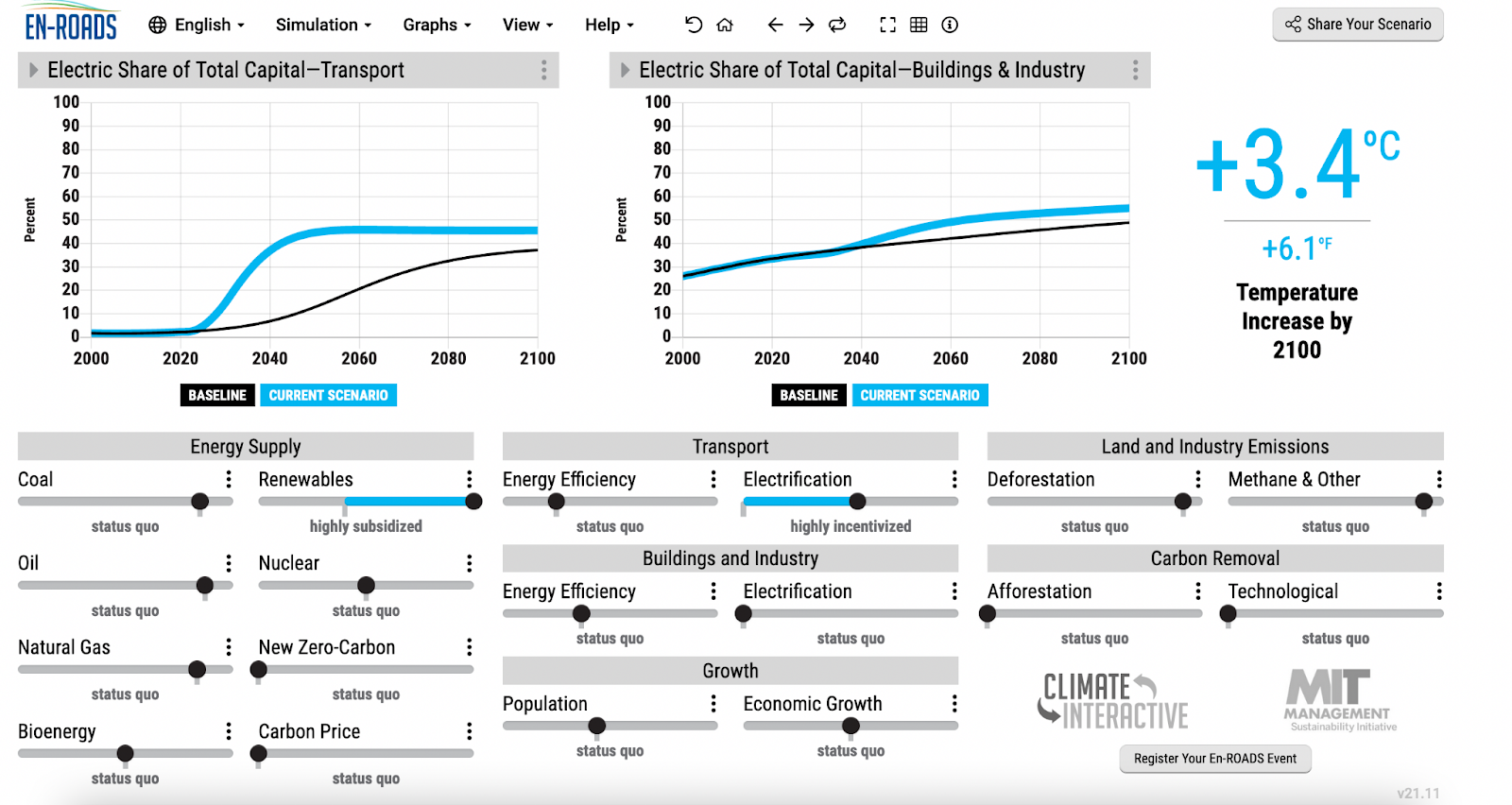 What if the sliders have overlapping effects?

Sometimes when you move a slider, it does not have as much of an effect as you might expect, because it overlaps with other actions that you’ve already taken. For example, if you have already added a carbon price in your scenario, and then you add a tax on coal, you will not see as much of an impact as you would if you just added the tax on coal. The carbon price already did a lot to discourage coal use.

For a summary of this phenomenon, watch this video: