What is the background and meaning of the En-ROADS Baseline scenario? Print

The En-ROADS Baseline scenario answers the question, “What might the world look like if we don’t take further action on climate?” It simulates a world without any new energy or climate actions and does not include countries’ stated policy goals.

What is a baseline scenario?

To understand the scale and scope of a challenge, modelers start with a reference scenario. This is also variously called a baseline or “business as usual” scenario. The purpose of such scenarios is to characterize a dynamic challenge by showing a pattern of behaviors over time that policy actions can then be compared against.

The En-ROADS Baseline scenario was created as a reasonable starting point of minimal climate action from which to test various changes in policies and assumptions to see the impacts on our global climate. It helps us understand what the world might look like in the future in the absence of efforts to mitigate climate change. It is not a prediction of the most likely future or an assessment of near-term policy action.

What is NOT included in the En-ROADS Baseline scenario?

How does the En-ROADS Baseline scenario relate to the SSPs?

The En-ROADS Baseline scenario was designed to be consistent with the baseline scenario for SSP2. The SSPs, or Shared Socioeconomic Pathways, are a set of scenario narratives developed for the Integrated Assessment Models (IAMs). SSP2 is called the “Middle of the Road” scenario, as it represents a future with some challenges to climate change mitigation but reflects continued progress in technological development. In SSP2, population growth stabilizes towards the end of the century and the economy continues to grow steadily. Other SSPs represent different future scenarios, with some resulting in better outcomes for our climate and some worse.

Each SSP has a baseline scenario, which looks at what would happen in that world if climate action is not taken. For the En-ROADS Baseline, we choose to adopt the baseline scenario definition from one of the foundational papers on the SSP scenarios, Riahi et al., 2017, which explains the baseline scenario as "a description of future developments in absence of new climate policies beyond those in place today” and notes that “[t]he baseline SSP scenarios should be considered as reference cases for mitigation, climate impacts and adaptation analyses.”

How did we create the En-ROADS Baseline?

In creating the En-ROADS Baseline, we began by assembling research literature on global projections and trends in factors such as population (from the United Nations), economic growth (from the World Bank), and historical greenhouse gas emissions (from the Intergovernmental Panel on Climate Change). This work was initially done at the regional level for 20 regions in our C-ROADS model and then was aggregated globally for En-ROADS. As we added these data sources and ran the model’s equations factoring in climate feedbacks, capital stock turnover, market dynamics, and more, we then compared our results to the SSP2 Baseline scenarios of six of the primary Integrated Assessment Models (IAMs): PNNL GCAM4, IIASA MESSAGE-GLOBIOM, EIEE WITCH-GLOBIOM, PBL IMAGE, NIES AIM/CGE, and PIK REMIND-MAGPIE.The graph below shows the fit of En-ROADS (in blue) to the six IAM SSP2 Baseline scenarios, as well as its place in between RCP 8.5 and RCP 6.0, in terms of temperature change from pre-industrial levels. 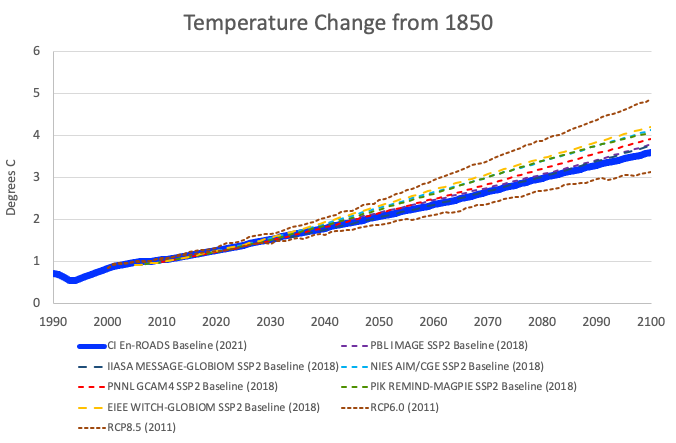 We use the SSPs to calibrate parts of the En-ROADS model and its behavior, particularly the impact of various carbon prices (e.g., those in the scenarios that create radiative forcing levels such as 2.6, 4.5, etc.) on energy production from coal, oil, gas, renewables, nuclear, and biomass, as well as CO2 and greenhouse gas emissions. The En-ROADS Baseline exceeds the growth of renewables in the SSP2 Baseline scenarios. To learn more about why, read our blog post on the December 2020 update to En-ROADS: https://www.climateinteractive.org/analysis/en-roads-updated-with-new-baseline-scenario/. We also compare the En-ROADS Baseline scenario to other scenarios from the International Energy Agency (IEA), Shell, DNV-GL, and others.

What if I disagree with some of the assumptions in the En-ROADS Baseline scenario?

Researchers draw different conclusions about what some of the underlying parameters that compose baseline scenarios should be. We encourage curious users to vary a wide range of assumptions in En-ROADS under the Assumptions menu. There you can change factors tied to the climate, economy, and energy system to explore how sensitive the model is to their changes. We picked one set of assumptions to be our default in the En-ROADS Baseline Scenario, but users can select a different suite of assumptions as a starting point, and then test policies and engage their audiences from there. The assumptions can be accessed by clicking on Simulator in the top menu bar of En-ROADS and selecting Assumptions.

Further information can be found in the En-ROADS Reference Guide.