The accelerating growth of renewable energy is one of the most hopeful signs when it comes to addressing climate change. For example, the cost of utility-scale solar photovoltaic energy (solar PV) fell by 77% from 2010 to 2018. It may come as a surprise that renewable energy does not grow faster, sooner, or larger in En-ROADS, but the model reflects the dynamics of the system. Here we explore three main points to help you understand this.

1. En-ROADS is consistent with other models in both baseline and low-emissions scenarios.

For the IAMs, the baseline scenarios shown in the graph below are SSP2, a “middle of the road” scenario in which major economic, social, and political trends do not change much from their historical trajectories. (To learn more about Shared Socioeconomic Pathways (SSPs), this article by Carbon Brief is helpful). 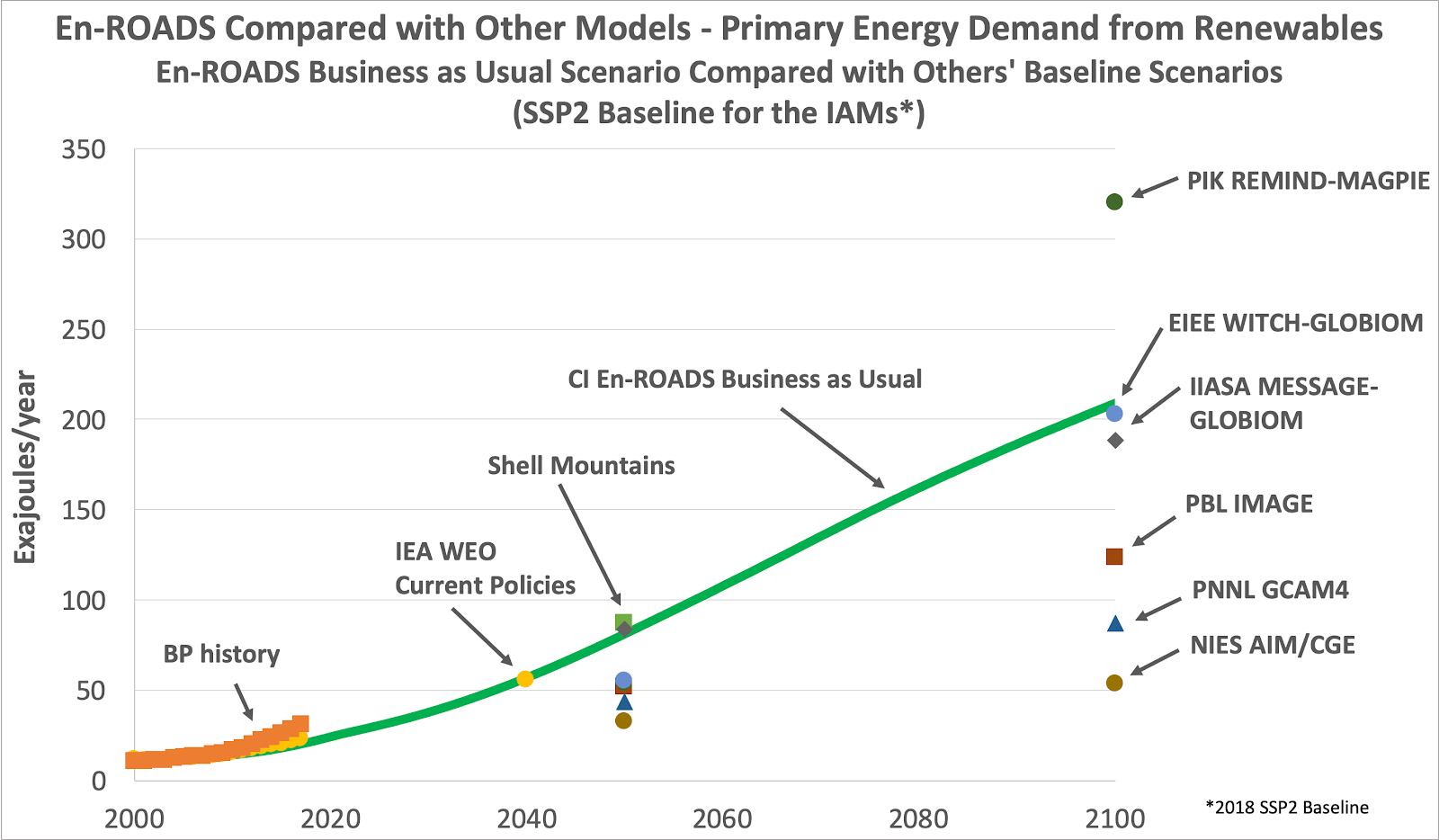 Now let’s examine scenarios that imagine higher rates of growth for renewables. The graph below compares a low-emissions scenario in En-ROADS to low-emissions scenarios from eight different models, including the IEA WEO New Policies Scenario, the IEA WEO Sustainable Development Scenario, Shell’s Sky scenario, and six major Integrated Assessment Models (versions of SSP2 2.6). This En-ROADS low emissions scenario includes a renewables subsidy of -$0.07/kWh that begins in 2020 and a hypothetical breakthrough in energy storage technology in 2030 that reduces the supply cost of storage by 50%.

This En-ROADS low emissions scenario (the blue line below) for primary energy demand from renewables is higher than the IEA New Policies and SDS scenarios and the Integrated Assessment Models scenarios. It aligns with the Shell Sky scenario. 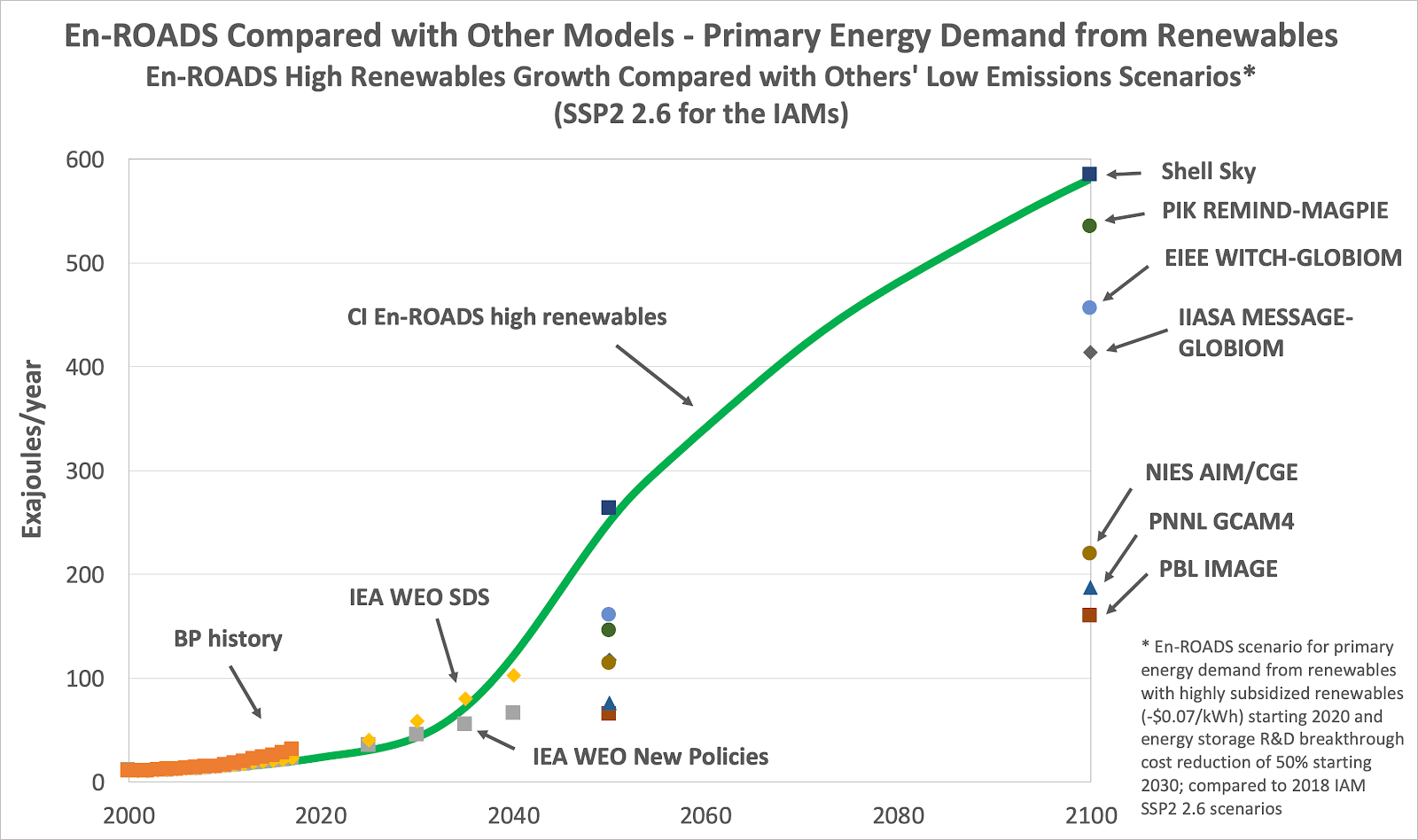 The En-ROADS Business-as-Usual scenario for renewable use is at the high end of the span of scenarios created by the IAMs for the SSPs. The graph below compares primary energy demand from renewables in En-ROADS to the same six Integrated Assessment Models (PBL IMAGE, PNNL GCAM4, PIK REMIND-MAGPIE, NIES AIM/CGE, IIASA MESSAGE-GLOBIOM, and EIEE WITCH-GLOBIOM). In this graph, the baseline scenarios from each of the five standardized Shared Socioeconomic Pathways (SSPs) are shown. The light-colored solid lines represent the IAMs, while the dashed lines represent En-ROADS. The solid blue line represents the En-ROADS default Business-as-Usual scenario. 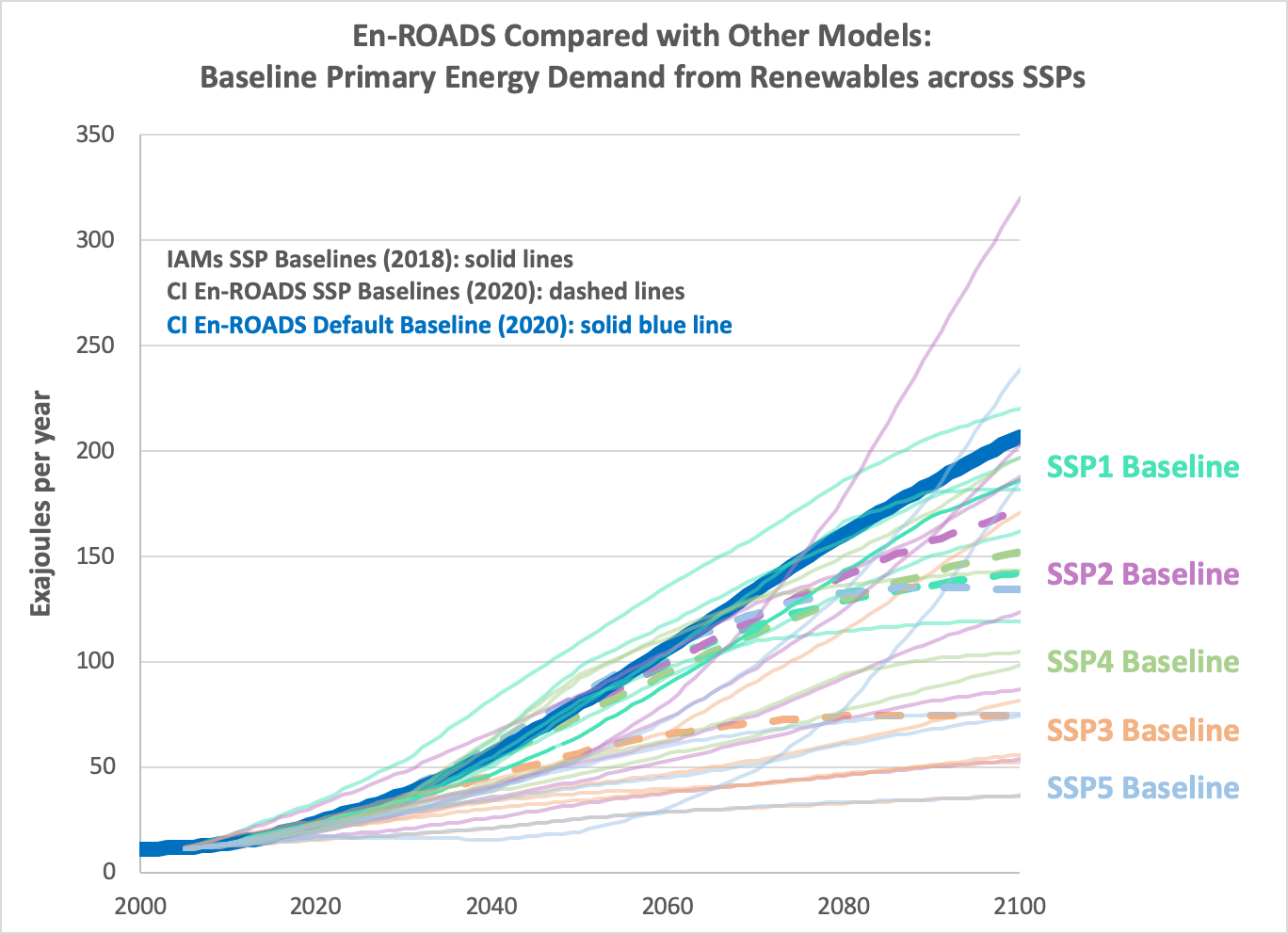 Slow capital stock turnover: New energy sources (e.g., renewables and new technology) take decades (not years) to scale up to sufficiently compete with coal, oil, and gas. New supply capacity doesn’t show up until old, long-lived capacity is retired (e.g., coal-fired power plants and oil refineries, which can survive for ~30 years). Only 6% of the total stock gets added every year. New zero-carbon energy may secure 20-50% of that market share, but even then, it adds only 1-3% to the total stock. The climate is only helped when coal, oil, and gas is retired away, and in the absence of other interventions, that amount is relatively small – approximately 3% per year.

Other dynamics affecting the growth of renewable energy include:

Large-scale energy storage technologies are still in a research-and-development phase. You can model a decrease in the cost of energy storage in En-ROADS. Open the advanced view of the Renewables slider by clicking the 3 dots, and scroll down to “Storage R&D breakthrough cost reduction” and “Storage breakthrough year.” 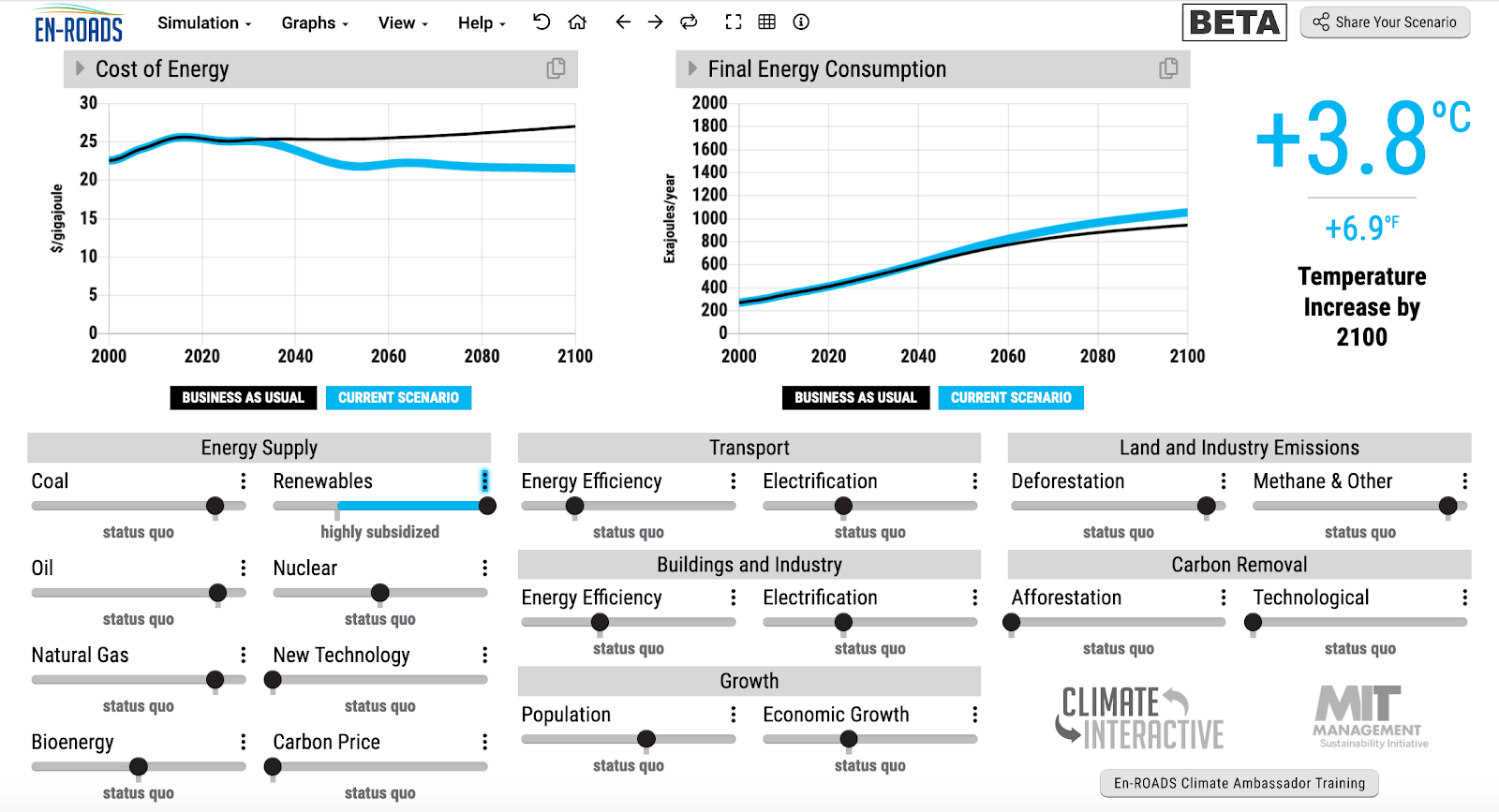 3. You can explore higher renewable growth scenarios in En-ROADS.

Some analysts, such as Bloomberg New Energy Finance and Rocky Mountain Institute, have suggested the possibility of renewables growing even faster than shown in most models. The IEA, for instance, has historically underestimated the growth of renewables. You can explore scenarios of even faster and higher growth in En-ROADS by changing the following settings: 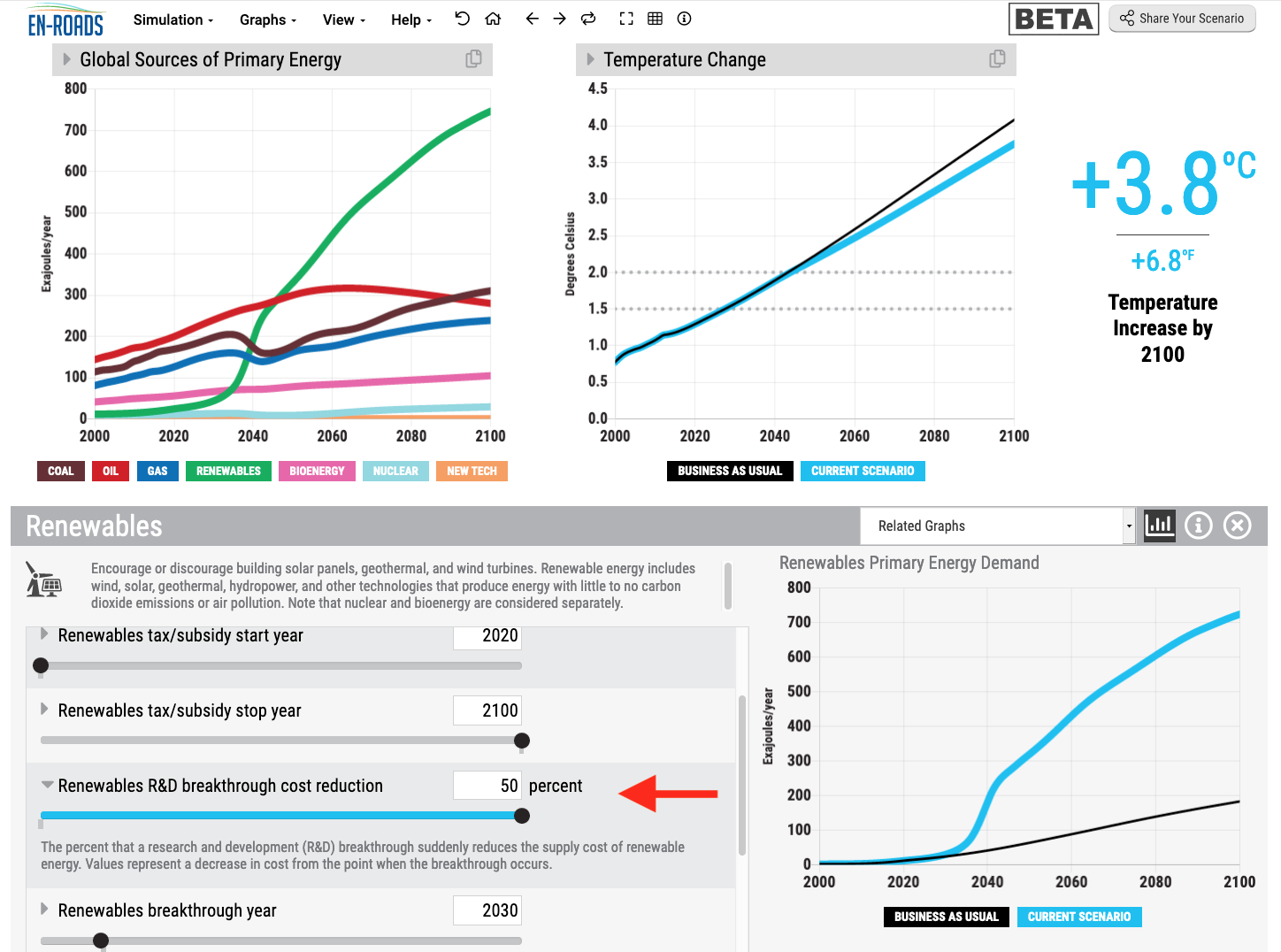 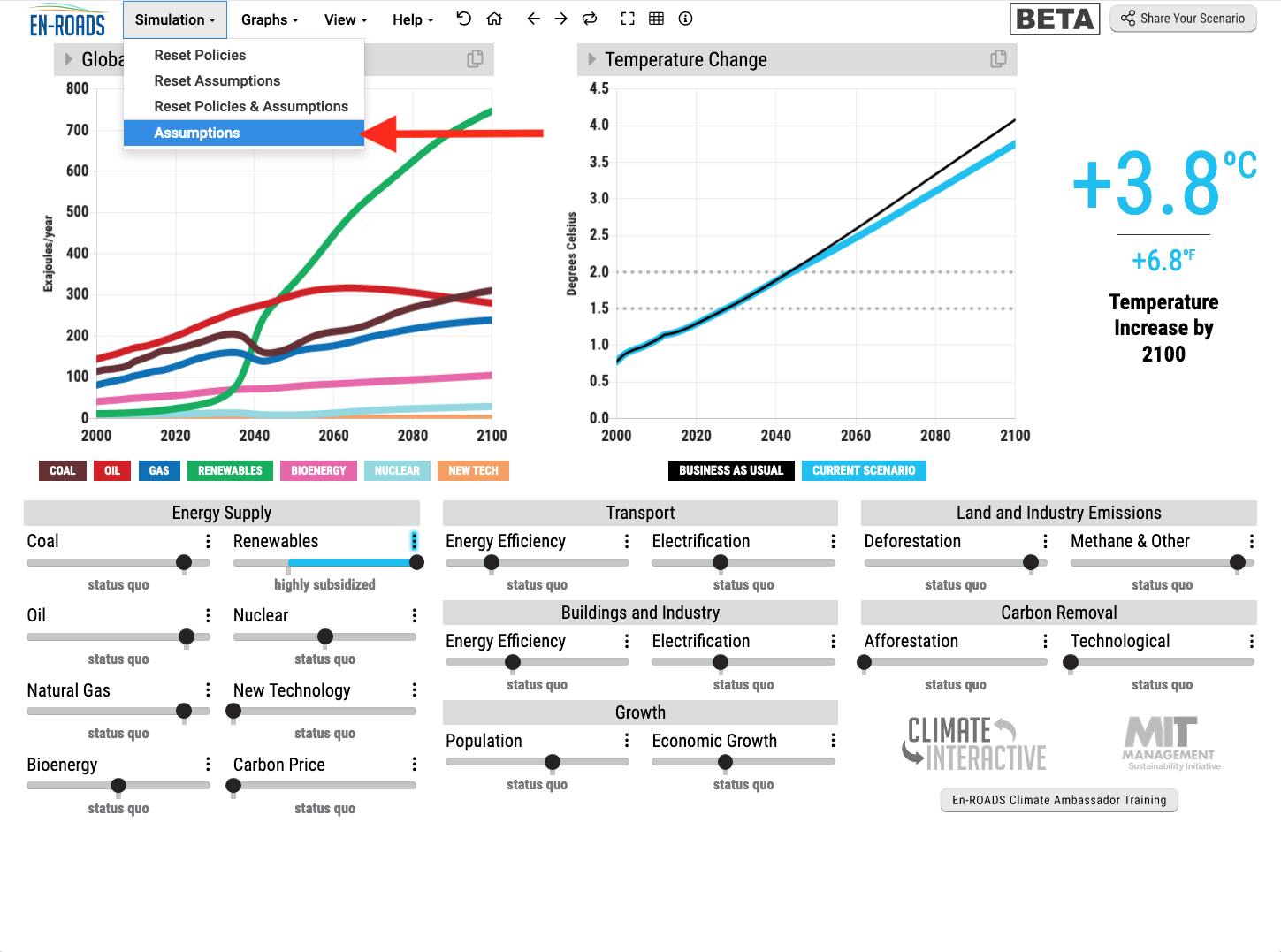 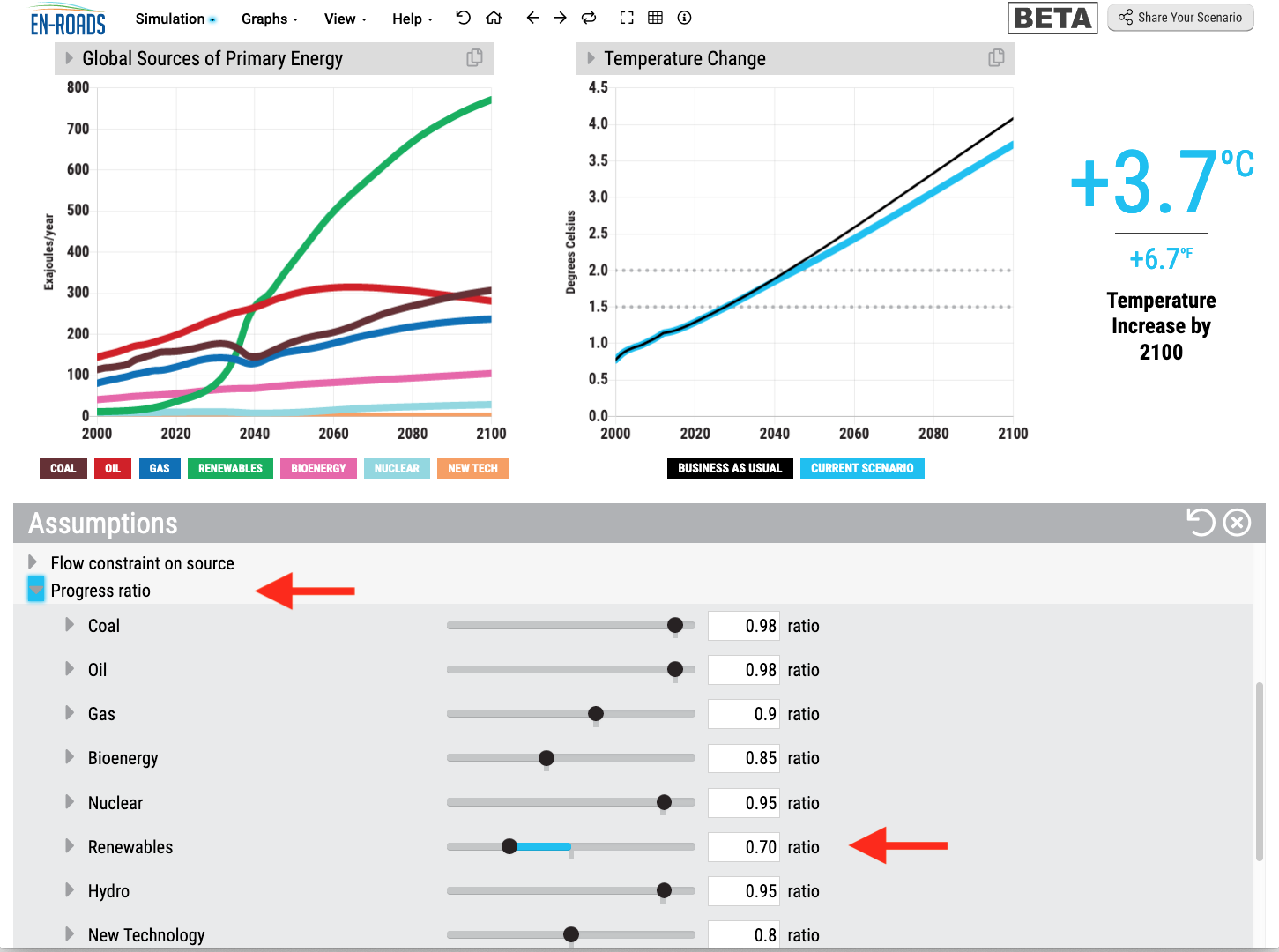 What if we maximize the policies and assumptions in En-ROADS that would lead to faster growth of renewables? Policies such as a carbon price or electrifying transport and buildings & industry boost renewables even more. Here we have created an example En-ROADS scenario with the following settings:

See this scenario in En-ROADS.

You can use the simulator to explore possibly unrealistic but interesting “what if” questions. The graph below compares this scenario in En-ROADS to SSP1 2.6 scenarios from six Integrated Assessment Models, IEA WEO’s New Policies scenario, IEA WEO SDS, and Shell’s Sky scenario. In this very low emissions scenario, SSP1 is a better scenario comparison than SSP2, which we compared against in the previous graphs. In this case, primary energy demand for renewable energy in En-ROADS (the blue line below) grows to 528 exajoules/year by 2050 and 1270 exajoules/year by 2100, far above any of the scenarios from similar models. 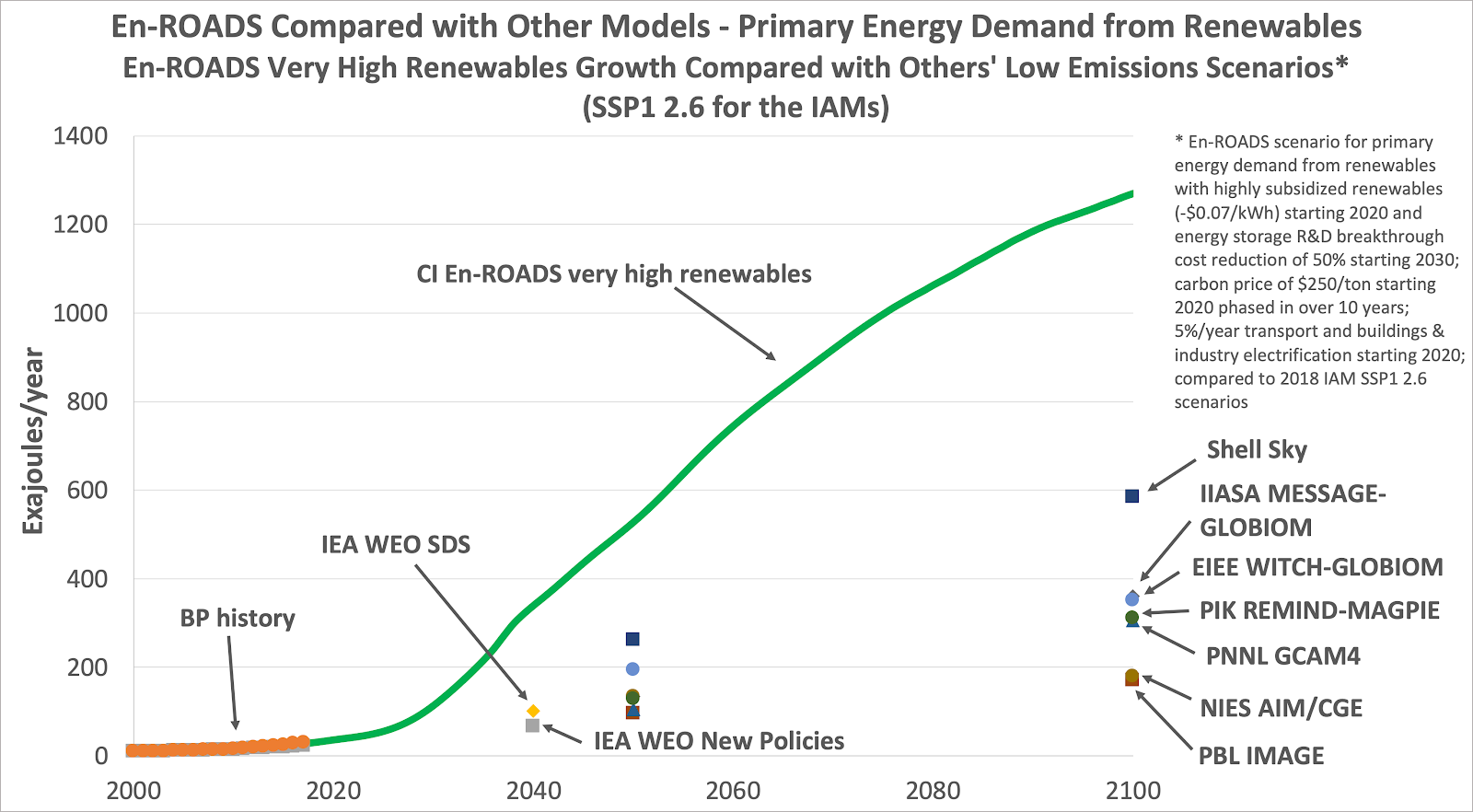