Why does coal use grow so large in the En-ROADS Baseline scenario? Print

Given the decline of coal recently in the U.S. and Europe, it may be surprising to see demand for coal growing in En-ROADS. Keeping coal in the ground is one of the highest leverage actions in addressing climate change. Coal is the most harmful fossil fuel in terms of carbon emissions, as well as in air pollutants that cause severe health impacts. It is a dominant source of energy globally, however, because it is relatively inexpensive to mine and transport.

Here we explore three main ideas to help you understand the dynamics of coal in En-ROADS:

1. The En-ROADS Baseline scenario for coal is consistent with other models.

The En-ROADS Baseline scenario for coal primary energy demand is consistent with the results of other simulations in the academic and business literature.

For the IAMs, the baseline scenarios shown in the graph below are SSP2, a “middle of the road” scenario in which major economic, social, and technological trends do not change much from their historical trajectories. (To learn more about the Shared Socioeconomic Pathways (SSPs), this article by Carbon Brief is helpful).

The En-ROADS Baseline scenario (the brown line below) for primary energy demand from coal aligns with or is slightly lower than these other models. It is higher than the IEA's Stated Policies Scenario (STEPS) 2040 forecast, it falls at the bottom of the 2050 IAM forecasts, and it falls at the lower end of the spread of the IAM 2100 forecasts.

Note, the IEA's Stated Policies Scenario (STEPS) includes current and planned policies, including country Nationally Determined Contributions under the Paris Agreement, while the En-ROADS Baseline does not include these pledges. Read more about the Baseline scenario in En-ROADS in this FAQ. 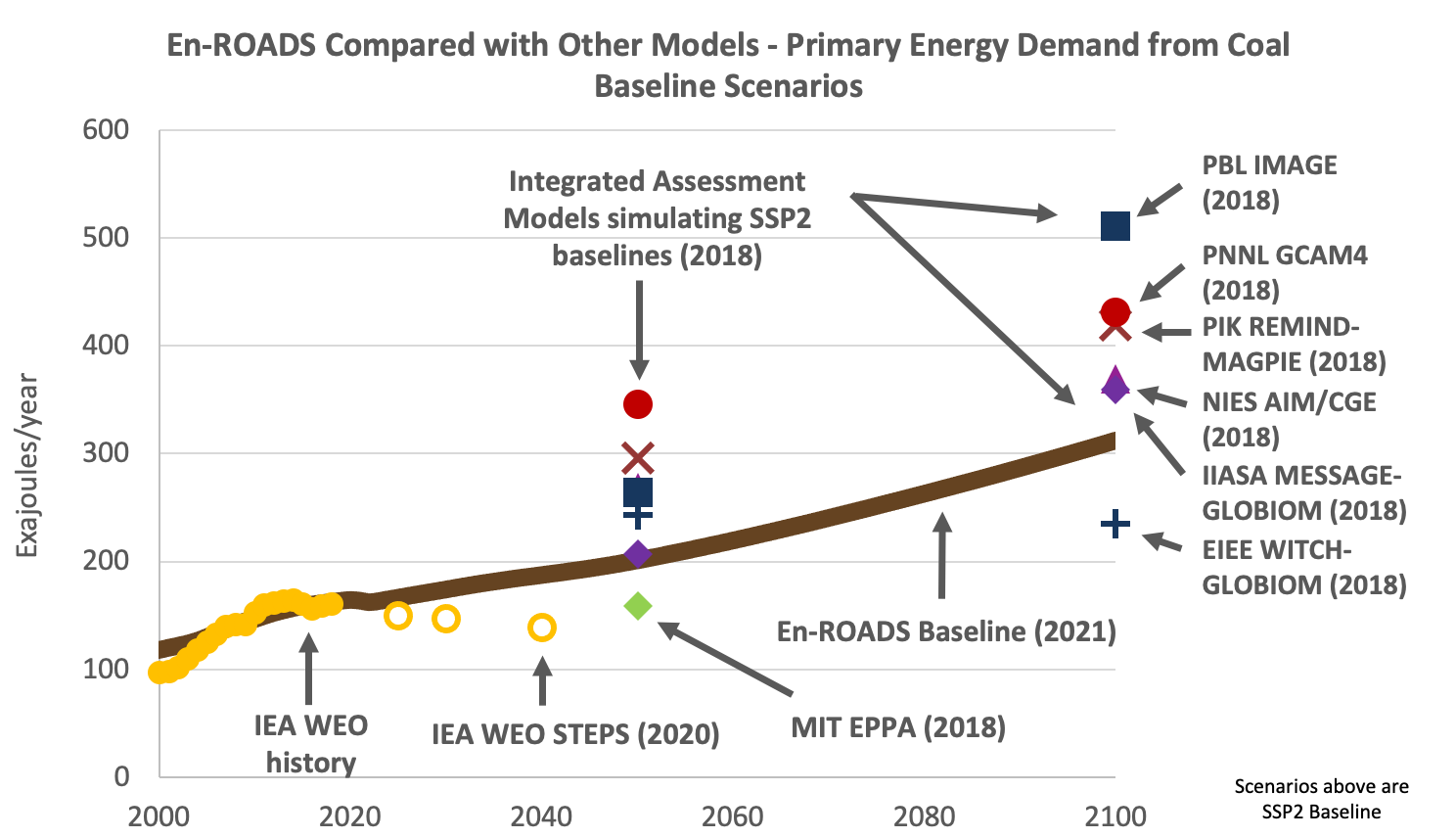 2. Several dynamics drive the persistence and growth of coal:

If you want to explore a world with more or less coal resources, you can alter the assumptions built into En-ROADS. Click the Simulation drop-down menu at the top of the En-ROADS simulator and select Assumptions. Under “Initial resource remaining” you can alter the total initial amount of coal, oil, and gas resources available at the beginning of the simulation.

Planned coal infrastructure, particularly in Asia, will lock in substantial long-term emissions. India's largest coal company recently announced a $6.4 Billion investment in coal mining, and in 2020, China added 38.4 GW of coal-fired power plant capacity. As of January 2021, 503 GW of new coal infrastructure was under development worldwide. To put that in perspective, 503 GW is approximately twice the current coal power capacity in the U.S.

However, groups like the Sierra Club have been successful in preventing the construction of planned coal infrastructure or causing companies to shut down operating coal power plants. U.S power infrastructure from coal fell by a record 18% in 2019, in part due to the efforts of community activists. The U.S. retired 106 GW of coal plants between 2006 and 2019 and cancelled 28 GW of planned coal plants.

3. You can explore different strategies that reduce coal more directly in En-ROADS, in line with reducing temperature. Here are some suggestions: